Skip to content
Home » Blog » Travel » The End of The Road

“The quest is to be liberated from the negative, which is really our own will to nothingness. And once having said yes to the instant, the affirmation is contagious. It bursts into a chain of affirmations that knows no limit.  To say yes to one instant is to say yes to all of existence.” -Waking Life

It has been a very long time since a blog post, but when it comes to writing, I live by Henry David Thoreau’s quote “How vain it is to sit down to write when you have not stood up to live.” And I don’t like to write un-inspired. I have certainly lived an amazing past 6 months, but any time inspiration struck, I would sit down to write and find myself buried in a bottomless email inbox. Busy is good, they say, when you own your own business.  Anyways, I’m all caught up on emails (mostly) and inspired, so let’s go…

We’ve made it! We’re here. We’ve officially arrived to the middle of nowhere, the end of the road. If you know me well, it probably baffles you that I’m saying “we” while on the road – I usually travel alone. This time I brought Mr. Alex Linnell along for the ride. It’s time to move into SUP race & touring boards, and I have very little knowledge when it comes to design theory on those.  Ask me anything about surfboard, wakesurf, or surf-style SUP design, but the nuances of race SUPs are vast, and Linnell understands them well, so I took him onboard at iSurf as a shaper.

Alex, quickly becoming known around Bali as “Alex too/two”, “Other Alex” or “Gentleman Alex” (The warung ladies at Serengan call me “Handsome Alex” and him “Gentleman Alex”), has been racing SUPs and designing paddleboards for another brand for several years. He also has an incredible amount of experience with touring SUPs, as he was the first person to ever paddle the entire length of the Mississippi River on a SUP surfboard. He owns a surf shop called The Black Oar on Lake Minnetonka, and quickly became the number-one iSurf dealer during the summer of 2014. I asked Alex to design a series of race and touring boards for the 2015 iSurf line.  And he is accompanying me to Asia to make sure the factory produces the shapes to spec. As soon as we approved our final board designs at the factory, we walked back into the factory office and booked a flight to Bali for some “product testing”. We surfed several of the main spots around Bali for the first week.  Then, a Dutch friend, Robert of Surfschool Karavaan, I met surfing in El Salvador years ago invited us to G-land to catch the next incoming swell. We haggled a good deal for accommodations, and jumped on a boat two days later. 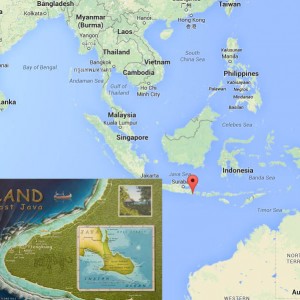 G-Land is a 9 hour drive, or 2.5 hour fast boat ride from Kuta, Bali. It is truly one of those end-of-the-road destinations: When arriving by land, you enter the Alas Purwo National Park from the city of Grajagan (This is where G-Land gets its name). From there, 4×4 is required for two hours on bumpy jungle track to arrive at one of three surf camps. After the final surfcamp, the ‘road’ becomes a walking path to the “fishing village,” which consists of four or five lean-tos reinforced by some blue tarps. From there, the path turns right and leads out to the reef. That’s it, there is nowhere else to go, except the “Keyhole.” The Keyhole is the channel at the end of the first break, “Kongs,” where they recommend surfers paddle out. So depending on how you count it, the end of the road is somewhere between G-Land Surfcamp, and the Keyhole.

After a busy summer schedule, three weeks of working in china, ten days in Balinese tourist traps, a bad case of “Bali Belly,” and some stressful moments in my personal life, it is an incredible relief to have made it to the end of the road and forget about everything for a few days. I recall walking out the reef to take some photos on my first evening here, still feeling too week to surf from stomach sickness. There was something about this place. I felt like a Catholic man walking into The Vatican, or a Muslim arriving to Mecca, as I walked the jungle path to the point. There was something in the air.  “This is a holy place,” I thought to myself. “I wonder if a non-surfer would feel it?”

I felt revived mentally and spiritually, but physically my body was still weak. Despite this, I told my friends and myself that I would surf the next morning. I was asleep by 8:30pm that night and awoke in cold-sweats at 5:30am from Robert, the Dutchman, knocking on my door. “It looks good. The sets are big. Do you want to surf?”

It was low tide, so we walked out on the reef.  I was weak, aching and incredibly dehydrated. “I’ll feel better when I get in the water,” I thought to myself. Robert and I entered the water, and began paddling to ‘Money Trees’, G-Lands most infamous left point break. We arrived at the peak and I stretched my arms a bit, I still felt miserable.

There were only four of us in the water that morning. I sat there looking up and down the reef, left hand point breaks peeling everywhere I looked. Looking back to the horizon, there, the unmistakable lines of set-waves pushing into the bay. As they approached, the first unloaded on the reef just to my south. Surfers have pretty different standards when it comes to judging a wave as “big”. To me, waves are big when the faces are clearly over my head. This first set wave was MUCH bigger than my definition of “big”. The second set wave reeled in, and I stared down its open throat, as it broke even closer to me. “Today there is no hesitating,” I thought to myself as I analyzed the hollow face of the wave.  The second wave passed under me, and I looked back to the horizon. The third, and biggest, wave of the set was lining up and putting me right at the peak (where the wave breaks initially and leaves a clean shoulder to be surfed). Often times in surfing, the surfer does not choose the wave that will be surfed. Instead, the ocean chooses the surfer who will get the wave. This was my wave. “Today there is no hesitation.” I paddled and made the drop, but what the ocean giveth, the ocean taketh away… 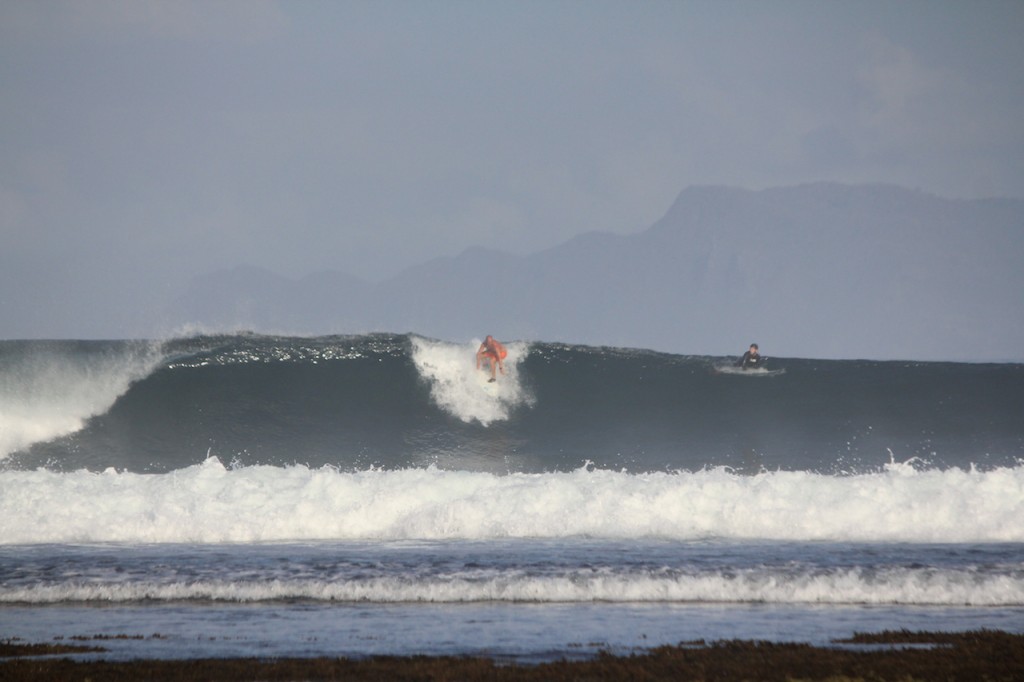 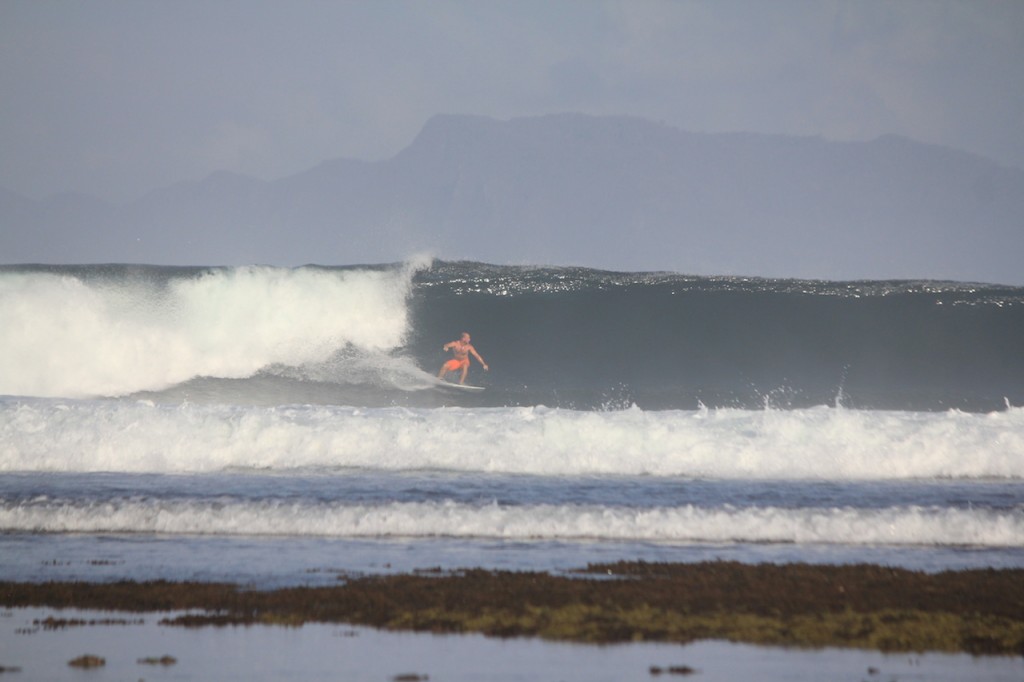 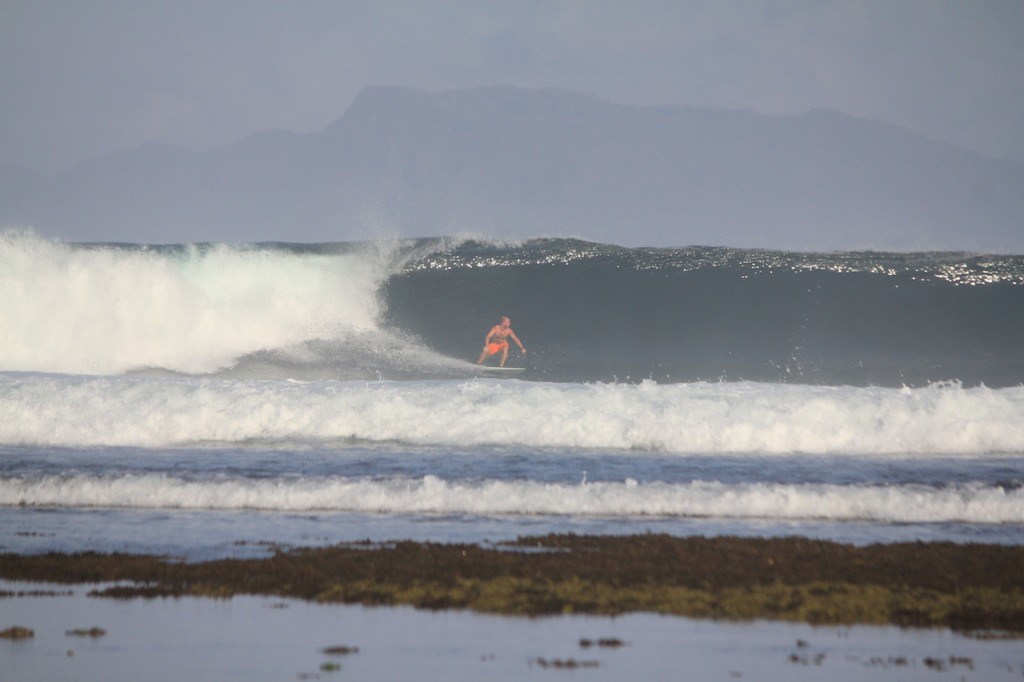 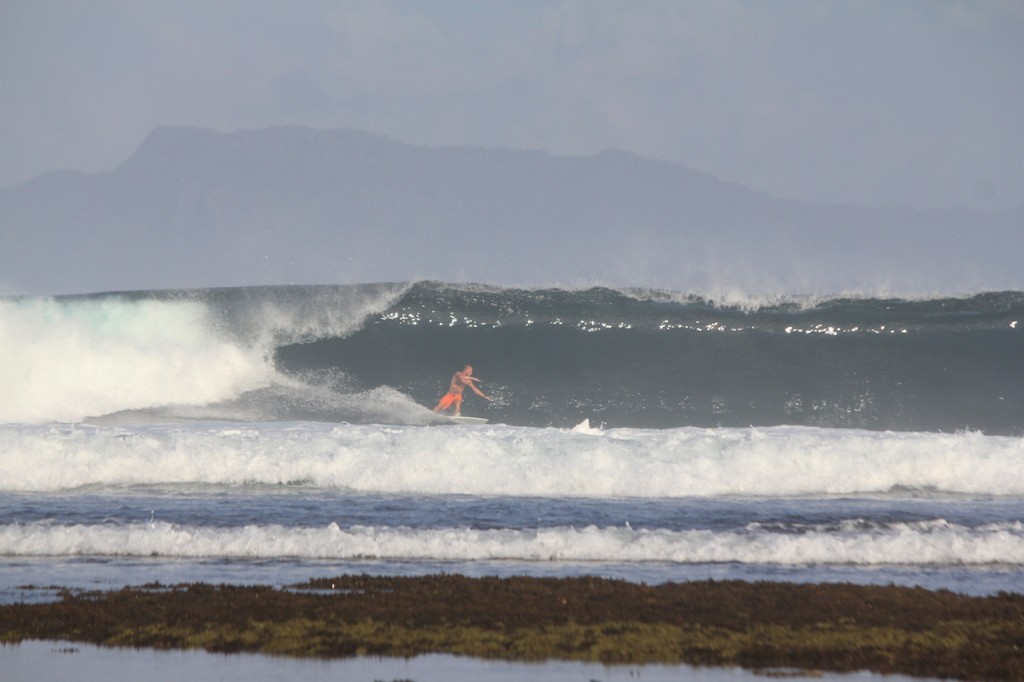 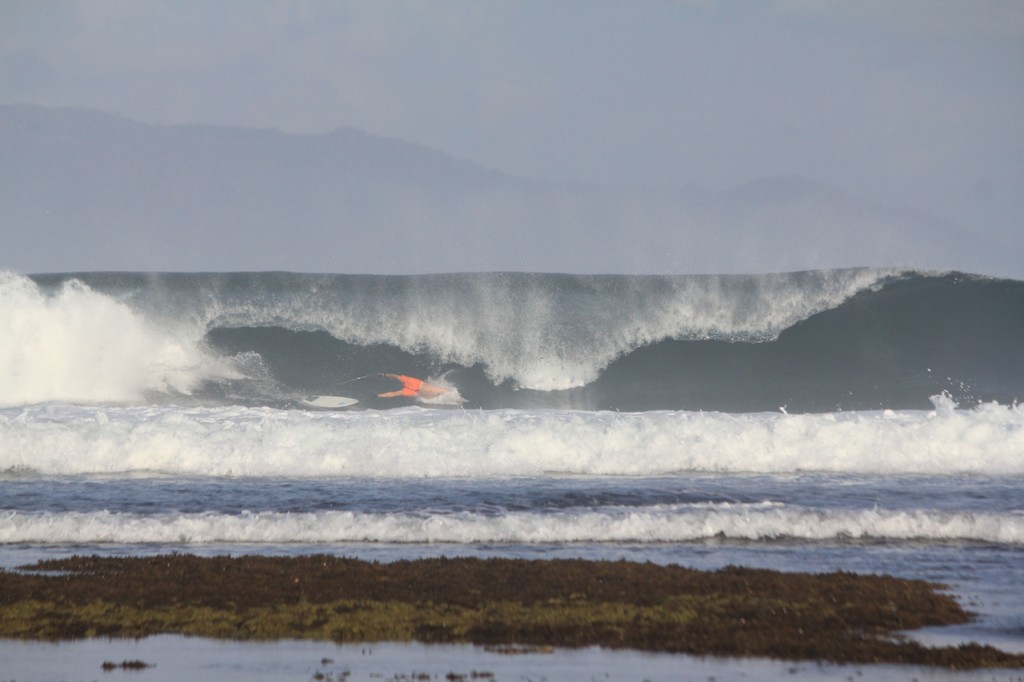 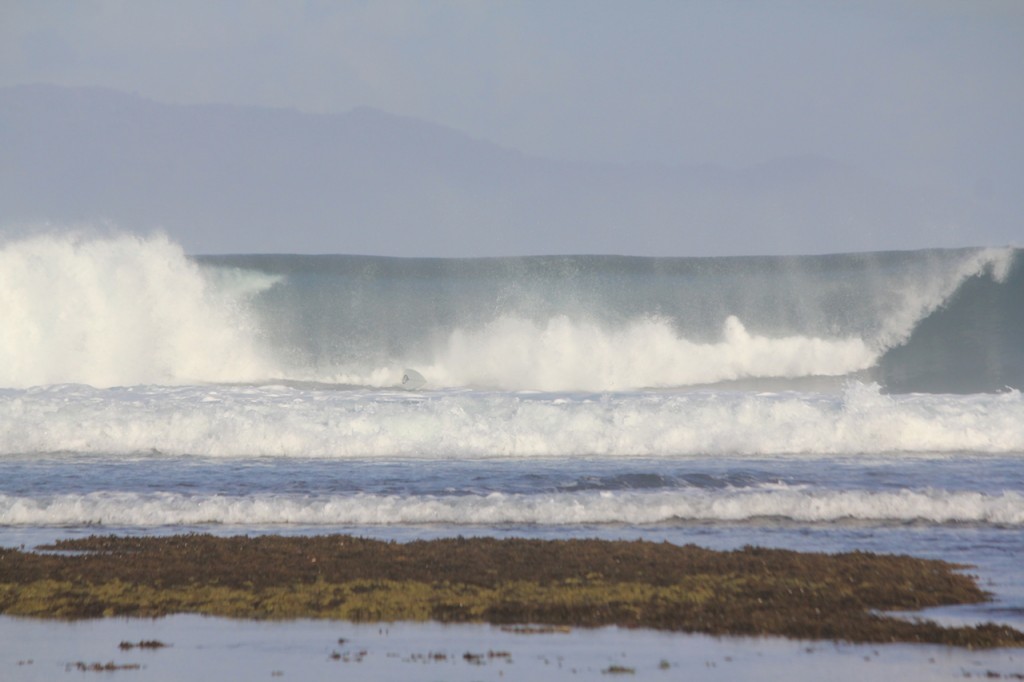 I dove into the wave and tried to make it out the back. It seemed to go well – I penetrated with the dive (but not deep as to avoid the reef). I waited underwater for a few seconds and then ascended thinking I was in the clear.  I wasn’t.  It was like swimming into a giant washing machine. I tumbled and dragged for a few more seconds (when underwater, a few seconds feels like much, much more).  And then surfaced to take one more wave on the head.  The set was over, and I paddled back out feeling like a new person. All the pain, all the soreness, all the grief, every negative of my life was gone.

I stayed out for a couple hours that morning getting several rides, and no more smashings. It was a great session for me.  Afterwards, I retired to breakfast, took a nap, ate lunch, then went out for another session at a break down the way called “Tiger Tracks” (you can imagine why).  Then it was dinner, a movie, and sleep.

So that’s the routine here at G-Land. Get some great waves. Get some great poundings. Eat good food. Drink heaps of water. We are given two sodas and two beers each day (Though I’ve been mostly opting for water to help my body recover). Bed-time is around 8:30-9pm, and first wave checks happen sometime between 5-5:30am. Not much else to do when your at the end of the road.

Feels good to write again. I’ll be back shortly with some sneak peaks at the 2015 surfboard lineup. I just had to get warmed up with something a little more creative.  Bed time here.  Another day of good waves tomorrow.  Cheers ya’ll.