The journey home has begun. My flight to Minneapolis/St. Paul departs from Bangkok international Airport next week, and I’ve decided to take a brief tour of SE Asia while en route. The cheapest flight to BKK put me overnight in Singapore, which was a welcome stay-over since I made a good friend in Bali who is from here. 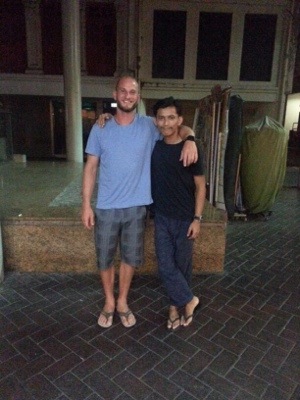 Ash, like me, is not the typical native of his homeland. He is not career focused, planning a retirement, or bent on establishing ‘security’ so he can have a ‘good life’. He is a dreamer, a connector, an adventurer, and a lover of people and life – a traveler.
Last night we spent our evening doing what most travelers do when they are, or are soon to be, arriving to home port. We charted courses of action over the next few months to put ourselves back on the road as soon as possible. But like most dreamers, our plans were frequently interrupted by recalling fond memories of the good people we met along the road.
The travelers agenda at home is simple: work, but avoid a career. Love, but avoid a constraining relationship. Save money for the next adventure, but enjoy time with friends and family. And stay connected to the thing that sets you free while traveling, despite the conditioning of the traditional lifestyle and surroundings of home.
The thing that sets you free… We’re sure it’s not the places you go, but rather it’s the people you meet and the connections you make… The holy communion of the travelers’ bond. Why is this feeling so prevalent on the road, yet it is so difficult to attain in our natural habitats?
(Impossible to embed music with WordPress iPhone app, but I recommend listening to “Sets Me Free” by The Apache Relay before reading the rest of this post.) 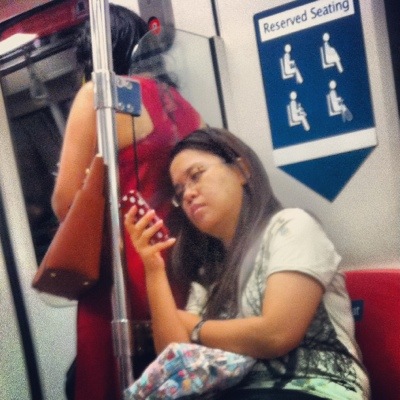 Today, I write this blog post while sitting in a Singapore subway train during morning rush hour. I keep looking up with my fresh-off-the-boat adventurer’s grin, but every time I make eye contact, I am met with stern face and sad eyes. I have passed by at least 1,000 people this morning, and have met only one smile (It was a young man in casual clothes holding hands with a pretty girl).
This comes in stark contrast to my last little islands of Nusa Lembongan/Ceningan, where most locals smiled and said hello as I passed to the point my face would hurt from smiling after a scooter ride to or from the farthest surf break. Why were these ‘poor’ seaweed farmers so much more happy with so much ‘less’? 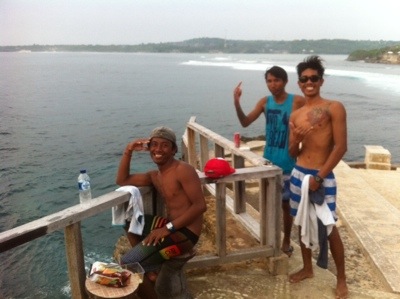 Like my home country (USA), The small island country of Singapore rewards hard work, loyalty, and dedication to a career with ‘security’. Ash and I tried to figure out what the benefit of ‘security’ is last night, but we’re lost to its purpose. The reason, I believe, is that Ash & I seek to act out of love, and never fear, and the drive for security is most likely rooted in the fear of insecurity.
In my opinion, fear-based-action is the most dangerous thing in this world to the human spirit, while love-based-action is the most essential thing to the development and sustainability of the human race. If you ask me what the meaning of life is, at this point in life I see it as this: “love based action, and appreciation/gratitude.” Simple and easy…
I’m currently reading Into The Wild, and last night on the flight to Singapore, I read the perfect quote the self-named Alexander Supertramp (McCandles) wrote in a letter to a good friend and admirer, encouraging him to leave his comfort-zone and pursue some adventure:
“So many people live within unhappy circumstances and yet will not take the initiative to change their situation because they are conditioned to a life of security, conformity, and conservatism, all of which may appear to give one peace of mind, but in reality nothing is more damaging to the adventurous spirit than a secure future. The very basic core of man’s living spirit is his passion for adventure. The joy of life comes from our encounters with new experiences, and hence there is no greater joy than to have an endlessly changing horizon, for each day to have a new and different sun.”
-Alexander Supertramp

That’s all from this Alexander for now. Time to find my gate and make my way to Koh Phagnan, Thailand via Bankok and Koh Samui. I’m logging some serious miles this week. I’ll be home on Wednesday. Ciao~

“There was once a man who became unstuck in the world – he took the wind for a map, he took the sky for a clock, and he set off with no destination. He was never lost.

“There once was a man who became unstuck in the world – instead of hooks or a net, he threw himself into the sea. He was never thirsty.

“There was once a man who became unstuck in the world – with a Polaroid camera he made pictures of all the people he met, and then he gave all the pictures away. He would never forget their faces.

“There was once a man who became unstuck in the world – and each person he met became a little less stuck themselves. He traveled only with himself and he was never alone.

“There was once a man who’d become unstuck in the world – and he traveled around like a leaf in the wind until he reached the place where he started out. His car, his job, his phone, his shoes – everything was right where he’d left it. Nothing had changed, and yet he felt excited to have arrived here – as if this were the place he’d been going all along.”

Castles In The Sky

The true destination of any successful adventure is ultimately home.  After a long trip, one usually arrives back with changed perspectives and priorities in life.  There is a great mental evolution that occurs when someone, of great enough fortune to travel the world, sees the stark contrast of the developing world.  There is no better way to realize ones own great fortune than to leave the resorts, walk the streets of the incredibly impoverished, speak to the 5th generation fisherman who was forced to sell his boat to buy a taxi, or refuse the drunk aboriginal beggar 50 cents towards his next pint.

(Press the play button for sound)

For a while, acculturation to the simple life of the locals is a welcome personal development experience.  However, this lifestyle begins to take its toll to the modern westerner.  For me, it is beginning to be too much.  Heat rashes, infected wounds, mosquitos, and other things that bite me in the night are becoming too much.  The daily ritual of waking up with unknown itches, trying to control infections, and avoiding mid-day heat at all costs is making this feel less and less like the dream holiday everyone imagines.

Anyone who has traveled long enough knows that a trip will end in one of two feelings: 1)  A feeling that there is much more to learn on this road and it’s too soon to leave or 2) A content ego and a longing for the people and places which create “home”.  Travel for long enough, and you’re bound to eventually make it to stage two.  I crossed that line this week.

Not to say that I am not enjoying myself.  The Indian Ocean is producing good swells this week, and the waves are pumping.  I am currently in Kuta, Bali sending off some friends and collecting my visa extension, but tomorrow I go back to the paradise island of Nusa Lembongan for more waves and good vibes.  Surf’s up and I am called to the sea.  But home is merely two weeks away, and right now that is a very welcome thought.

“Lacerations” on a big swell

I’m currently sitting on the balcony of my hotel listening to waves detonating on the reefs of Nusa Lembongan.  It sounds like a combination of thunder and explosives, one after another, with no silence in between.  I tried to look out into the darkness to see the size, but the half-moon has not yet risen.  The roars of the ocean and the surf reports are our only indication to what we surf tomorrow.  The biggest swell of my Bali trip has arrived in the dark of tonight, and its building for tomorrow. 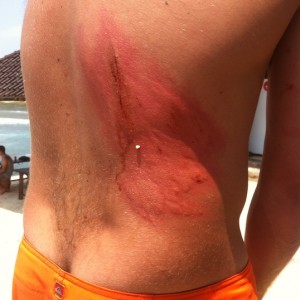 Jay and I are both a bit nervous, and its obvious.  When we hear a bigger set hit the reef, we exchange semi-nervous looks and say things like “We shouldn’t have partied that hard last night.”  or “What are our safety precautions?”  We are both sitting in silence going through all the worst and best scenarios in our heads.  Long hold-downs, reef bounces, and stand-up-barrels are all possible, and they are not mutually exclusive or inclusive.  Anything is possible tomorrow.

Nusa Lembongan and neighboring Nusa Ceningan offers 4 main reef breaks, each with the potential for epic waves.  We’ve been told by a local friend to not surf Ceningan on anything larger than a 5 foot swell because the clean-out sets will be double (that means 15-20 foot rouge waves to wash you onto the shallow reef and into the punji-stick-like seaweed farms on the inside.  Thus, Cenigan is out of the question.

We will decide tomorrow between Playgrounds, Lacerations, or Shipwrecks, three quality reef set-ups out in front of the beach near our hotel.  We will balance wave quality, crowd, and risk to select the wave with the highest potential reward.

Thunder and explosions on the horizon remind us that this is real, and this is why we came here.  Time now is for sleep, tomorrow is for barrels.

No images found!
Try some other hashtag or username